Air Vs. Electric Tools: Which is Better?

Professionals and avid DIYers seem to prefer pneumatic tools over electric models because such tools are faster, safer, more efficient, and easy to use. Find out what makes air tools better than electric tools.

Home / Uncategorized / Air Vs. Electric Tools: Which is Better? 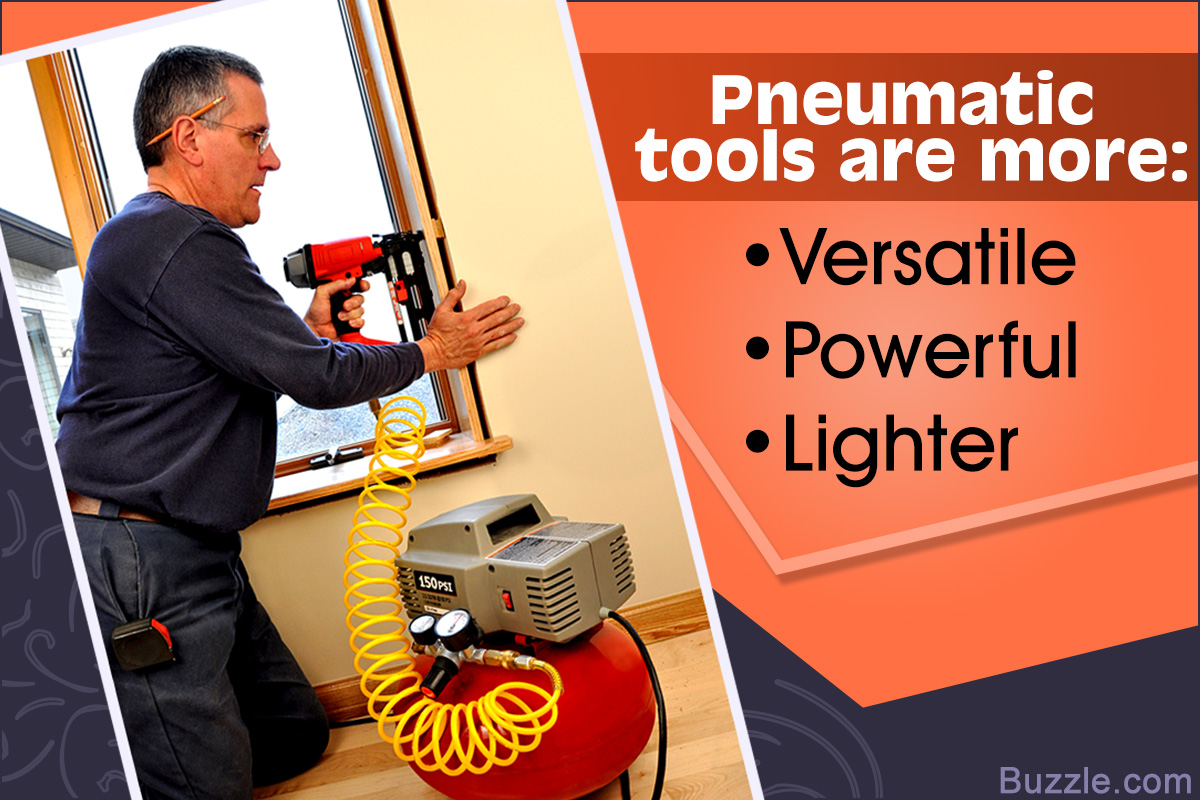 Professionals and avid DIYers seem to prefer pneumatic tools over electric models because such tools are faster, safer, more efficient, and easy to use. Find out what makes air tools better than electric tools.

The bellows was the first manual pneumatic tool to be invented by the Chinese mechanical engineer Du Shi in 31 CE.

Since electric and pneumatic varieties of the same tool can be found in most stores, it is quite understandable if the average DIYer gets increasingly confused about which one to buy. After all, both air and electric tools have their advantages and disadvantages, and personal preference plays a crucial role in determining which mechanism is better.

That being said, pneumatic tools are largely considered as industrial grade tools that are meant for heavy-duty repair and construction, and thus, outperform electric tools to a large extent. This HomeQuicks article discusses which is better by comparing air with electric tools.

Unlike air tools, electric ones require a constant supply of electricity, which can either be provided through corded extensions or batteries. Therefore, such tools need to be used near a plug point to keep them running, or the users must keep a few extra rechargeable or normal batteries with them at all time while using these tools. Additionally, pneumatic tools usually consume lesser power than electric ones.

Pneumatic tools are more powerful than electric tools because air compressors create substantial power by condensing and compressing air which, on release and trying to attain its original volume, creates bursts of energy. This excess energy lends the exceptional power to air tools and makes them far superior than electric tools.

In comparison, electric tools run at a lower RPM, air pressure (psi), and horsepower. Therefore, electric tools drastically increase the time required to complete a task during a project, thereby, the job is done slower than air tools.

Electric tools on the other hand, have bulky motors within the main frame of the tool which adds to the weight of the tool.

Although pneumatic tools are lighter, easier, and more comfortable to use, they are not necessarily more portable. The need for compressed air, makes it necessary to carry the air compressor at all times. Secondly, the air compressor in itself can prove to be quite heavy and may not be as simple to carry to remote job sites. However, all air compressors are either wheeled, whereas the lighter ones are usually small and can be hand-carried with ease.

In contrast, although electric tools such as impact tools, drills, hammers, etc., may be heavier than air tools, these are still comparatively more portable because all these tools require is batteries or an extension cord that can be plugged to any plug point.

Air tools are a lot safer to use, because unlike electric tools, no electricity passes through the main air tool and remains restricted within the motor of the air compressor. Therefore, air tools do not pose the threat of electrical shocks to the user. Secondly, these tools can also be used in wet conditions.

On the other hand, corded electric tools always pose a threat of electrocution, and thus, must be used carefully and require constant maintenance.

Each electric tool requires its own set of batteries and cords, which often cannot be used interchangeably. Also, continuous use tends to heat up the motor in an electric tool, requiring the user to use it intermittently.

Air tools are more durable as they do not have intricate parts inside the tool itself, and thus, do not require to be maintained frequently. Secondly, the cost of repair and replacement for air tools is often comparatively lesser than electric models.

The cost of a tool usually depends on its brand, features offered, and quality. That being said, air tools are comparatively less expensive than electric models if you have an existing air compressor. Besides, in the long run, a variety of air tools can be used on one air compressor thus reducing the total cost of owning air tools.

If the cost of just one and not a set of electric tools is compared with one air tool, then the electrical tool is cheaper due to the absence of other parts, like air compressor, which is necessary to run the tool.

Therefore, to sum up the comparison, although electric tools offer greater portability, air tools are more powerful and suitable for heavy-duty work.