Parts of a Grandfather Clock and an Explaination of Their Functions

Stately and regal, a grandfather or pendulum clock can add to the ambiance and mystique of any room. Here, we try to shed some light on old grandfather clock parts and their functions. 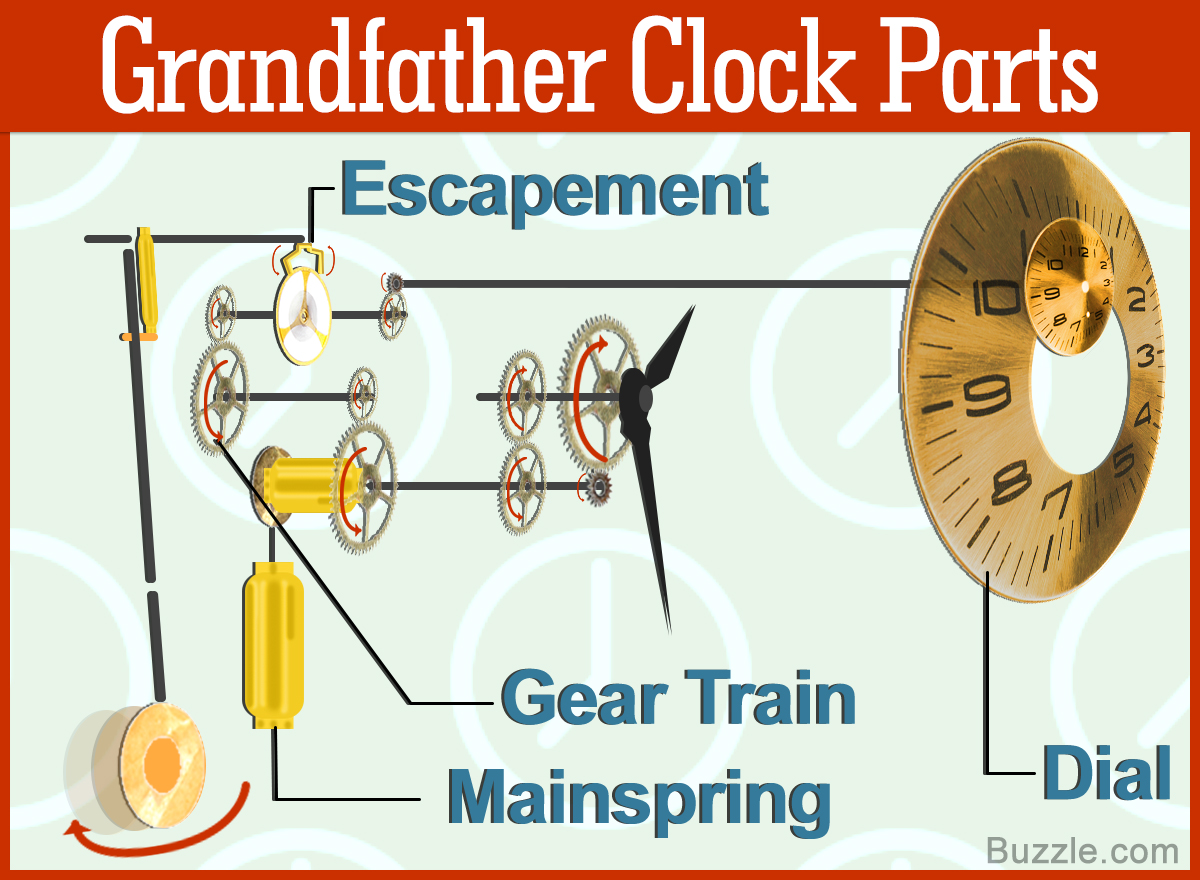 Stately and regal, a grandfather or pendulum clock can add to the ambiance and mystique of any room. Here, we try to shed some light on old grandfather clock parts and their functions.

One of the most famous grandfather clocks struck one as the mouse went up the clock and struck twice when the mouse came down it. The clock depicted in the nursery rhyme “Hickory Dickory Dock” might have been a well-maintained one, since it struck on time. But modern-day reproductions do not resemble the older versions in that they neither contain old clock parts nor do they have to be wound in order to show us the right time. The mere mention of grandfather time clocks paints a picture of a tall, stately, wooden clock placed in the corner with a long pendulum oscillating away at all times. The origin of the name grandfather is unclear but a general assumption is, a pendulum clock above 6 ft. (1.5 m) is termed as a grandfather clock. The development of these types of clocks were fist carried out by an English clockmaker in the late 17th century. Most of these clocks strike or chime at the completion of an hour and some also at the fraction of an hour.

At the core of every grandfather pendulum clock is its movement. The movement dictates the hour hand, minute hand, strike, chime and thereby time keeping. The pendulum and weights are crucial to the operation of any mechanical clock’s movement. The pendulum regulates and adjusts the time-keeping. A mechanical clock may contain three weights to provide power to the hour strike, time and chime. All three weights are different and each weight must be hung properly to guarantee proper functioning. Weights are hung from the escapement device by a cable or chain. The weights must be raised after every 7 days or the clock will stop. Through the use of a crank, raising of weights is accomplished. The striking and chime sounds are achieved by a succession of hammers hitting rods of varying lengths.

A power source; either a weight on a cord that turns a pulley. It is a metal ribbon that is the power source in most mechanical watches and clocks, it is this spring, which we call winding, that stores the mechanical energy moving the clock’s wheels in return.

Also called gear train, it regulates the speed from the power source or mainspring to the pendulum or weight. The hands of the clock are attached to the spindles of various gears in a gear train. Hence, we can see the hour hand move slower than the minute hand.

Pendulums are the oscillating objects seen in long-case clocks and are most prominent feature associated with antique clocks. A pendulum or weight is suspended from a pivot so that they oscillate. The time taken by a pendulum to swing from left to right is essential in calculating time.

One of the most important parts of a mechanical clock, this device drives the pendulum or weight, thereby converting rotational motion of the gears into oscillating motion of the pendulum. The escapement device is driven by the mainspring or power source. When the pendulum swings, it releases one tooth of a gear in the gear train, thereby changing from a “locked” state to a “rotating” state. This lasts for a short period that ends when another tooth on the gear train strikes the opposite arm of the pendulum, which locks the gear again. It is the primary reason of the “ticking” sound of a clock.

This is the face of the clock or the graduated dial of the clock that registers the rotations of the gear train driven by the escapement. In short, it indicates the time with the help of rotating hands. In the most universally accepted and recognized form, a dial has numbers 1-12 on them. Some clocks also have sub dials for date and moon phases.

A key or a cranking lever is an essential component of any mechanical clock as it is used to wind or charge the primary power source (mainspring) of any mechanical clock. The time period between successive windings vary from one clock to the other. Some clocks, as mentioned earlier, require winding once a week or even once a day.

One of the most remarkable and identifiable element that has made this clock very distinguishable is the chimes. For those who are somehow unaware, a grandfather clock is not to be considered to be a real and genuine in the true sense if it does not have a working chime. To make the chimes work efficiently, it will need the help of a series of wheels, levers and hammers. Usually chime sequences sounded on the top of every hour but in the early 20th century, quarter-hour chime sequences were added to long-case clocks. One of the most popular chimes sequences is Westminster Quarters.

Repairing and/or maintaining these clocks requires a skilled craftsman, or a person who is familiar with the delicate gears, cables, chains, dials and other parts of the clock. Repairing or maintaining older and rarer clocks can sometimes require custom-made parts as some grandfather clock parts might not be available for that particular brand or model. It is vital to repair and maintain such clocks with quality parts in order to retain the integrity and longevity of each timepiece.

While long-case or pendulum clocks are now mostly valued as decorative antiques, since the advent of quartz technology has resulted in smaller and efficient clocks. These old-styled clocks were widely used and considered the most accurate timekeepers for almost three centuries. But the classic craftsmanship and regal grandeur of a grandfather or pendulum clock is what will still make them sought-after even after so many centuries.