How to Remove Rust from Cast Iron Cookware

When not stored properly, the moisture in the atmosphere leads to formation of rust on the surface of cast iron. This article will tell you how to remove rust from cast iron.

Home / Uncategorized / How to Remove Rust from Cast Iron Cookware

When not stored properly, the moisture in the atmosphere leads to formation of rust on the surface of cast iron. This article will tell you how to remove rust from cast iron.

There are several benefits of cookware made of cast iron, also known as CI, as it is said that it lasts for a lifetime. However, it is possible only if you handle it with proper care. Sometimes, due to improper storage, cast iron gets oxidized and is no longer fit for use. Instead of discarding the rusted cookware, you should gather some information on how to remove this rust and implement it on your cookware. Here, we have shared such tips with you in the following sections.

Potato is effective in scrubbing out rust from a cast iron pan. First of all, put some oven cleaner on the pan. Cut the end of a potato and rub it vigorously on the rusty surface. Continue to rub the pan till all the rust is cleared. Then, wash off the liquid with a mild dish-washing detergent and water, and let the pan dry up thoroughly. Another cleaning option is to sprinkle 2-3 spoons of salt on the pan and then pour the same quantity of vegetable oil on it. Scrub the pan with a thickly-folded paper towel after this. Rub more intensely on the areas that have rust. In case the rust is severe, you can scrub it with steel wool. When all the rusted spots are gone, wash it off with liquid soap and water. Dry it thoroughly and season it using the same process as has been discussed in the previous section.

After rust removal, you should store the pot or pan in such a way that it does not oxidize all over again. For storing, the right method is to put a paper towel on the cast iron to absorb the atmospheric moisture. Do not cover it up with lids while storing. Also, do not keep two cast iron cookware in direct contact with each other while storing them. 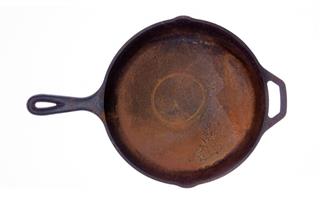 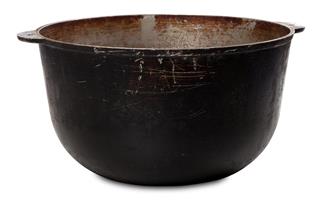 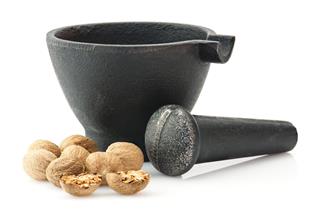