18 Types of Sushi Knives that Chefs Use

What's the secret behind those perfectly sliced sushi rolls that you see in Japanese restaurants? Well, it all depends on what type of knife sushi chefs use! To gain that perfection, getting a specific sushi knife set is a must. So, let's get acquainted with the types of Japanese-originated knives.

Home / Uncategorized / 18 Types of Sushi Knives that Chefs Use

What’s the secret behind those perfectly sliced sushi rolls that you see in Japanese restaurants? Well, it all depends on what type of knife sushi chefs use! To gain that perfection, getting a specific sushi knife set is a must. So, let’s get acquainted with the types of Japanese-originated knives.

The most popular knives found in a Japanese kitchen are the deba, santoku, nakiri, usuba, takohiki, and yanagi.

Sushi, the traditional Japanese recipe, combines vegetables, seafood, and even tropical fruits in its making. Sushi (sliced raw fish) served without rice is Sashimi. To prepare this dish, specialized Japanese cutlery is used. This is where Japanese knives come into picture. These knives can be broadly classified into two groups―traditional and western styles. They are divided on the basis of their honing styles.

A traditional sushi knife is honed on one side (single bevel), while the western counterpart is honed on both the sides (double bevel). The latter one is actually designed like western knives, but with the traditional Japanese influence. The design and construction of each knife varies. Generally, different types of steel are used. The common choices include stainless steel (sharpest), carbon steel (low maintenance), and composite steel (balance of both).

If you’re a beginner, knowing how to work with the Yanagi, the Takobiki, and the Usuba, will give you the desired, well-sliced sushi rolls. But if you want to achieve a chef’s professionalism, knowing about each of the following would be helpful. Let’s look into the different types of sushi knives that chefs use.

Origin: Kansai (Osaka) region of Japan
Usage: This traditional knife is used mainly for working with whole fish. Its blade is designed in a way that it fillets the fish without damaging it. It should not be slammed down like a meat cleaver, or used for chopping meat involving larger bones.

Origin: Japan
Usage: This knife is used to cut paper-thin slices of fish with uninterrupted strokes. It has got its name from the fugu blowfish, ’cause traditionally, it was used to cut it. It is usually served on a painted plate so that the design of the plate is visible through the fish slices.

Origin: Kansai (Osaka) region of Japan
Usage: The Kamagata Usuba differs from Usaba of the Kanta region. It has a pointed tip that lets you do delicate work like making thin sheets of veggies.

Origin: Kanto (Tokyo) region of Japan
Usage: This knife is conventionally used to slice straight-cut sashimi and octopus. The specialty of this knife is its blunt tip that lets you cut harder food items and obtain thin slices.

Usage: Garasuki has a sharp, thin tip that cuts fillets and heavy joints with ease. It very cleanly and accurately separates meat from the bone or the cartilage. It is a heavier version of the Honesuki boning knife.

Usage: Gyuto is a western-style Japanese chef’s knife. It helps in quick chopping of meat and vegetables. This being a versatile knife, it is considered as a favorite of most chefs.

Usage: It is a sturdy knife used for boning and paring meat. It has a pointed tip, and can sometimes have an obtusely sharpened heel to balance the boning work. It is also known as Hankotsu-Maru or Sabaki-Nishigata.

Usage: The Honesuki knife is, again, a boning knife but with a heftier spin, used for poultry in general. Its sharp, thin tip separates the bone from meat with ease. The thickness of the spine of the blade gradually increases, providing balance for boning.

Usage: Honyaki is actually a class of Japanese knives that has a sharper edge and is difficult to maintain. It is pricey as compared to other knives. The steel portion of the knife is so hard that it is not susceptible to chipping or cracking if handled incorrectly. Chefs who are highly skilled use this knife.

Usage: Nakiris are western-style knives, designed specifically for chopping vegetables. The peculiar thing about nakiris is their squared-off tip and thin blade. They are ideal for push cutting and delicate chopping work.

Usage: Paring knives are used for peeling, slicing, and trimming fruits and veggies. They are mostly used for garnishing purposes.

Usage: This western-style Japanese knife is mostly used for peeling the skin of fruits and veggies.

Usage: The petty knife works like a paring knife, and is used for intricate carving and presenting of vegetables. However, it can also be sparingly used in the preparation of meals.

Usage: Santoku is the perfect home-cooking knife with a roundish tip. The literal meaning of Santoku is “three virtues”, which can cut meat, fish, and vegetables.

Usage: Sujihiki has a long, narrow blade that slices through meat and veggies effortlessly. It is the western analogy of traditional-styled Yanaji.

Yo-Deba translates to ‘western deba’, so it is deba’s western equivalent, and looks almost like a butcher’s knife. It’s double-bevel edge is ideal for cutting crab shells and foods that are semi-frozen. 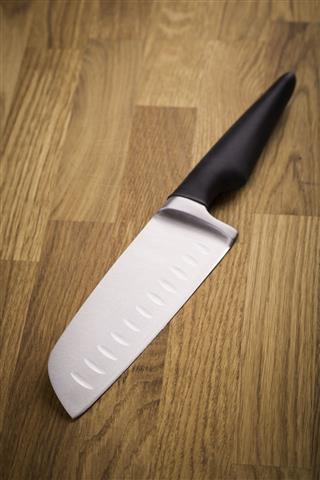 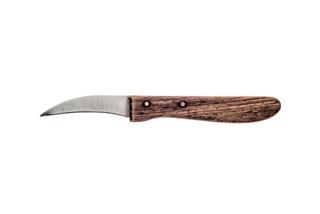 Out of these, Sushi chefs mostly use Deba, Yanagi, and Usuba knives while making sushi, and their western equivalents like Kamagata usuba and Nigiri.