Home / Uncategorized / 10 Unexpected Items That can be Composted

To say composting is en vogue would be an understatement.  If you are not yet composting, the time to do so is now.  The best part is you can compost many more items than you might assume.  Below, we identify 10 unexpected items that are completely compostable.

Takeout food containers are typically tossed in the trash or recycling bin without a second thought.  Instead of trashing these containers, it is better to add them to your new compost.  As long as the container is made of paper, it will compost quite well.  Furthermore, pizza boxes can also be composted.  In fact, the grease from pizza will stain cardboard to the point that it proves difficult to recycle.  As a result, it is better to compost the box rather than toss it in the recycling bin.

Keep a small bag or bucket by your dryer so you can collect the lint and transfer it to your compost.  You read that right.  Dryer lint really is compostable.  If you have enough space for a bonfire, you can also use your dryer lint to help start a backyard fire.

Collect your pet’s fur and put it in your compost.  Though waste from dogs and cats will not prove compostable, some pet owners report rabbit, hamster and guinea pig droppings really are compostable.

Ice cream cartons are compostable as they are made of paper.  So don’t be so quick to recycle or throw out those ice cream cartons.  Toss them in your compost and they will gradually break down on their own.

Just about everything you toss in the bathroom trash can be composted.  This means your nail clippings, stray hairs and hair you cut on your own in a DIY manner can be put in the compost.

Cotton balls and q-tips should go directly into your compost after use.  As long as the q-tips have a wood or paper stem, they will prove compostable.  However, q-tips containing plastic cannot be composted.

Instead of throwing those coffee grounds from your morning brew in the trash, put them along with the filter used to brew your coffee in the compost pile.  This approach will minimize your waste while boosting your goal of adding to your compost.

Wine corks can be composted as the cork is biodegradable.  Toss your wine corks directly into the compost and no one will see them in a trash, perfectly concealing your love of the so-called nectar of the Gods while simultaneously helping to preserve our sensitive planet. 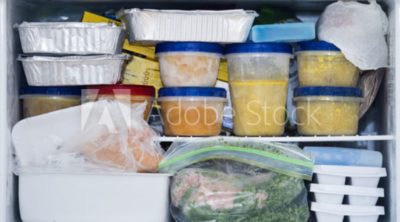 6 Surprising Foods You can Freeze