A double boiler is a kind of kitchen equipment that consists of two fitted saucepans that are stacked one over the other. There are many substitutes of double boiler that you can use.

Have you come across the term double boiler in a recipe that you are making and wondered what it is? A double boiler is a very handy piece of equipment that can be found in the pantry of most chefs and people who are fond of cooking gourmet food. It is an essential item that is used for melting chocolate and making delicate sauces and soups without scorching them. It consists of two saucepans that are placed one above the other and which are made to fit together. The bottom saucepan which is of a larger dimension is directly placed over heat and is filled with an inch or two of water. The second saucepan which is smaller than the bottom saucepan is placed above it, and the food item (chocolate or sauce) is cooked through indirect heat. The water simmering at the bottom saucepan transfers the heat to the upper saucepan through conduction.

Normally we prepare dishes by cooking them under direct heat, either over the stove or oven. This type of cooking method works for heartier food like meat, poultry or vegetables. But for some items like egg based sauces, chocolate or lemon curd, direct heat will break down the dish. In such a case you need to use a double boiler. For those of you who do not have one, the next best thing is to improvise by using a double boiler substitute.

If you are making a recipe that calls for the use of a double boiler, then there is no way that you can prepare the recipe in direct heat. So, if you do not have a double boiler then you need a substitute for a double boiler. The best double boiler substitute that you can use is to use a small pot or saucepan with a small base, as the bottom half of the boiler. Now pour water into the pot until it is filled one or two inch from the bottom. Place it over the stove and let it come to a gentle boil. Now place a heat-safe metal or glass bowl over the pot so that its sides are resting on the top half of the pot. It is better that the dimensions of the glass bowl is slightly larger than the pot, so that the bowl can rest over the pot without your having to hold it. Cook the sauce or any other food on the bowl and if you need to cover the bowl, just use an aluminum foil or a pan lid.

Another great substitute for double boiler that you can use is called the waterbath or bain-marie. This method is used extensively to make custards, cheesecakes, soufflé or egg based sauces that requires indirect heat. In this method, a large shallow pan is filled about two-thirds with water and a smaller pan is used to hold the recipe. The larger pan with the container is then placed over the stove or an oven and allowed to cook at a low temperature. There are some things that you should keep in mind while using a substitute for a double boiler. You should ensure that the bottom of the bowl should not come in contact with the water on the lower pot and you should never overfill the bottom pot with water. Also remember that the bowl and the pot should not fit too snugly, or there will be a build up of steam that will lead to an explosion.

The indirect method of cooking used in a double boiler can also be used for keeping food warm, without any fear of the food drying out. If you like to prepare a lot of dishes that calls for the use of a double boiler pot, then it is better to purchase one so that you do not have to improvise with your kitchen pans and pots. 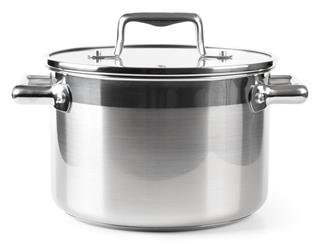 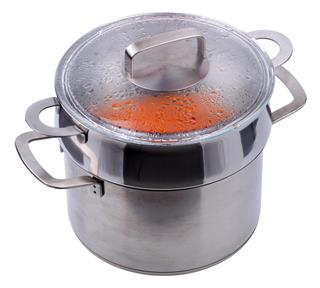